Analysis of covariance (ANCOVA) allows to compare one variable in 2 or more groups taking into account (or to correct for) variability of other variables, called covariates. 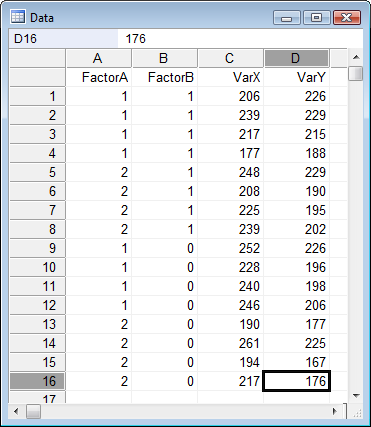 In this example (data from Wildt & Ahtola, 1978) data are entered for 2 factor variables named "FactorA" and "FactorB". The variable "VarY" is the dependent variable and there is one covariate "VarX". 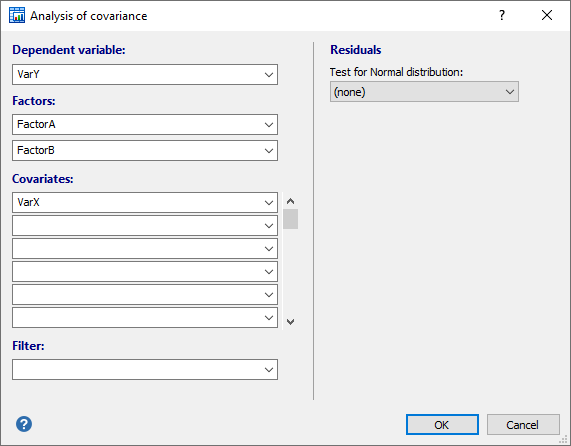 In the dialog box for ANCOVA you select:

Optionally, select a Test for Normal distribution of the residuals. 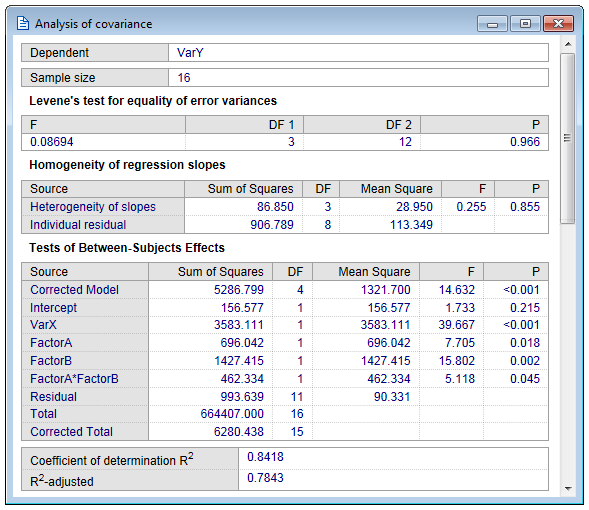 Levene's test for equality of variances

Prior to the ANCOVA test, Levene's test for equality of variances is performed. If the Levene test is positive (P<0.05) then the variances in the groups are different (the groups are not homogeneous), and therefore the assumptions for ANCOVA are not met.

The interpretation of ANCOVA and the associated adjusted means relies on the assumption of homogeneous regression slopes for the various groups (Huitema, 1980). If this assumption is not met (P<0.05) the ANCOVA results are unreliable.

If the calculated P-values for the two main factors A and B, or for the 2-factor interaction is less than the conventional 0.05 (5%), then the corresponding null hypothesis is rejected, and you accept the alternative hypothesis that there are indeed differences among groups.

When the 2-factor interaction (FactorA*FactorB) is significant the effect of factor A is dependent on the level of factor B, and it is not recommended to interpret the means and differences between means (see below) of the main factors. Since this ANCOVA procedure is an implementation of the General Linear Model (GLM), the procedure:

ANCOVA analysis assumes that the residuals (the differences between the observations and the modelled values) follow a Normal distribution. This assumption can be evaluated with a formal test, or by means of graphical methods.

This book presents a technique for analyzing the effects of variables, groups, and treatments in both experimental and observational settings. It considers not only the main effects of one variable upon another, but also the effects of group cases.