Calculates the statistical significance of the difference between two independent correlation coefficients.

This test is not performed on data in the spreadsheet, but on statistics you enter in a dialog box. 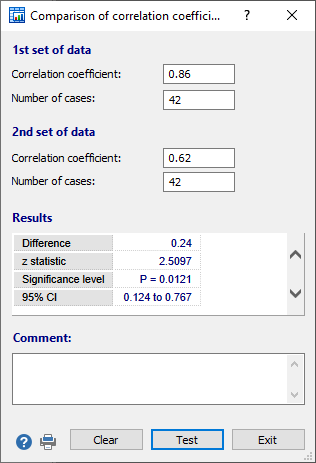 When the P-value is less than 0.05, the conclusion is that the two coefficients are significantly different.

In the Comment input field you can enter a comment or conclusion that will be included on the printed report.

The test used by MedCalc is a z-test on Fisher z-transformed correlation coefficients (Hinkel et al, 1988).

This introductory text provides students with a conceptual understanding of basic statistical procedures, as well as the computational skills needed to complete them. The clear presentation, accessible language, and step-by-step instruction make it easy for students from a variety of social science disciplines to grasp the material. The scenarios presented in chapter exercises span the curriculum, from political science to marketing, so that students make a connection between their own area of interest and the study of statistics. Unique coverage focuses on concepts critical to understanding current statistical research such as power and sample size, multiple comparison tests, multiple regression, and analysis of covariance. Additional SPSS coverage throughout the text includes computer printouts and expanded discussion of their contents in interpreting the results of sample exercises.