In clinical trials the investigator is often interested in the time until participants in a study present a specific event or endpoint. This event usually is a clinical outcome such as death, disappearance of a tumor, etc.

The participants will be followed beginning at a certain starting-point, and the time will be recorded needed for the event of interest to occur.

Usually, the end of the study is reached before all participants have presented this event, and the outcome of the remaining patients is unknown. Also the outcome is unknown of those participants who have withdrawn from the study. For all these cases the time of follow-up is recorded (censored data).

In MedCalc, these data can be analyzed by means of a life-table, or Kaplan-Meier curve, which is the most common method to describe survival characteristics.

To be able to analyze the data, you need to enter the data in the spreadsheet as follows:

The order of these columns is of course not important. Also, the rows do not have to be sorted in any way. 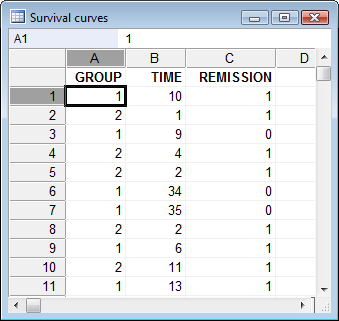 From these data, MedCalc can easily calculate and construct the Kaplan-Meier curve. 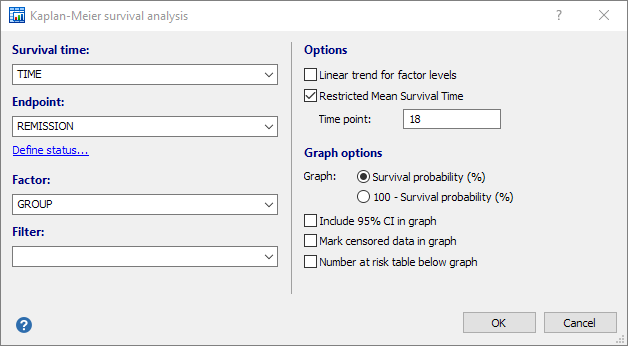 In this dialog box the following data need to be entered:

When all data have been entered click OK. MedCalc will open 2 windows: one with the survival graphs, and one with the statistical results.

The survival curves are drawn as a step function, as shown in the following example: 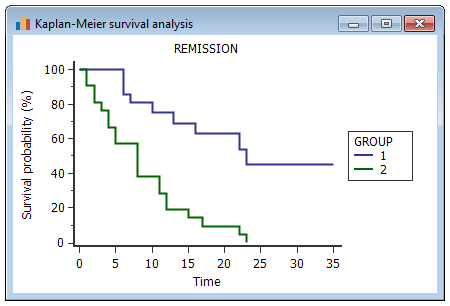 With the option "Include 95% CI in graph" selected, the graph looks like this: 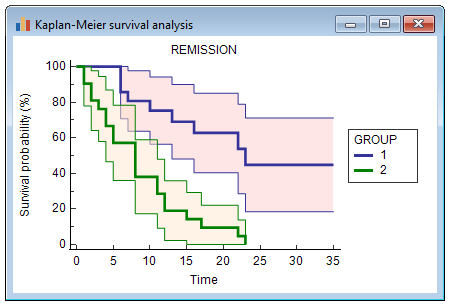 When the option "Number at risk table below graph" is selected, the result is: 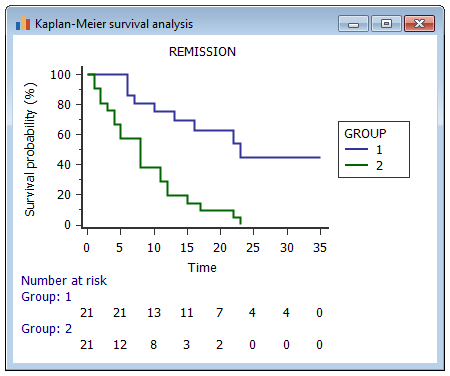 The mean and median survival time are reported with their 95% confidence interval (CI).

The mean survival time is estimated as the area under the survival curve in the interval 0 to tmax (Klein & Moeschberger, 2003).

The restricted mean survival time (RMST) is reported with its 95% confidence interval. If groups are defined then a table is displayed with the differences of RMST between groups, the 95% CI of the difference, and associated P-value (Royston & Karmar, 2013). When you scroll down, you see the result of the logrank test for the comparison between the two survival curves:

In this example, 9 cases in group 1 and 21 cases in group 2 presented the outcome of interest. The Chi-squared statistic was 16.79 with associated P-value of less than 0.0001. The conclusion therefore is that, statistically, the two survival curves differ significantly, or that the grouping variable has a significant influence on survival time.

When you have specified a factor then MedCalc also calculates the hazard ratios with 95% confidence interval (CI). Hazard is a measure of how rapidly the event of interest occurs. The hazard ratio compares the hazards in two groups.

In the example the hazard ratio is 5.1462 so that the estimated relative risk of the event of interest occurring in group 2 is 5.1462 higher than in group 1. This hazard ratio is significantly different from the value 1 (corresponding to equal hazards) since the confidence interval 2.3506 to 11.2663 does not include the value 1.

The hazard ratios and confidence intervals are calculated according to Altman et al., 2000.

If more than two survival curves are compared, and there is a natural ordering of the groups, then MedCalc can also perform the logrank test for trend. This tests the probability that there is a trend in survival scores across the groups.