The Mann-Whitney test is the non-parametric equivalent of the independent samples t-test (it is sometimes - wrongly - called a 'non-parametric t-test').

This test should be used when the sample data are not Normally distributed, and they cannot be transformed to a Normal distribution by means of a logarithmic transformation. 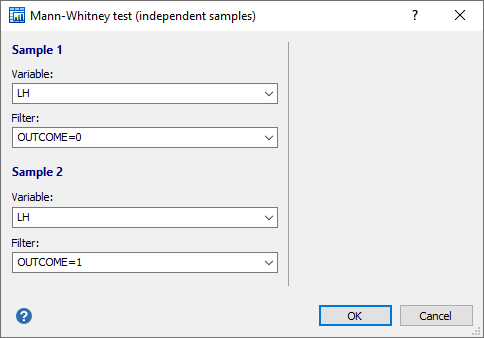 Select the variables for sample 1 and sample 2. You can use the

button to select variables and filters in the variables list.

Caveat: the two filters must define distinct groups so that the same case is not included in the two samples.

The results windows for the Mann-Whitney test (independent samples) displays summary statistics of the two samples.

Note that the Hodges-Lehmann median difference is not necessarily the same as the difference between the two medians. 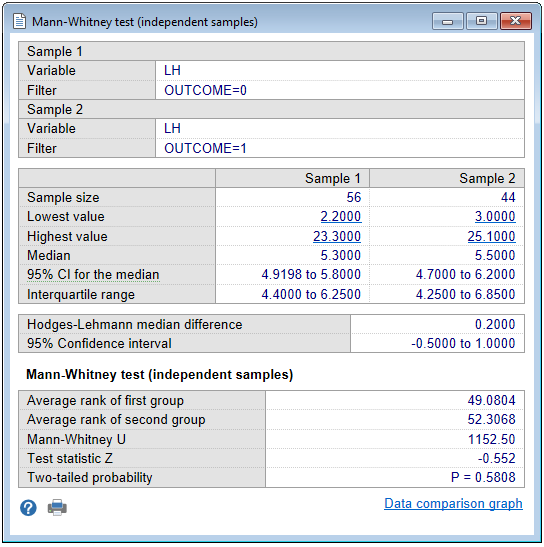 When either or both sample sizes are large (>20) then MedCalc uses the Normal approximation (Lentner, 1982) to calculate the P-value. For small sample sizes, in the absence of ties, MedCalc calculates the exact probability (Conover, 1999).

If the resulting P-value is small (P<0.05) then a statistically significant difference between the two samples can be accepted.

Note that in MedCalc P-values are always two-sided.