The following need to be entered in the Multiple regression dialog box: 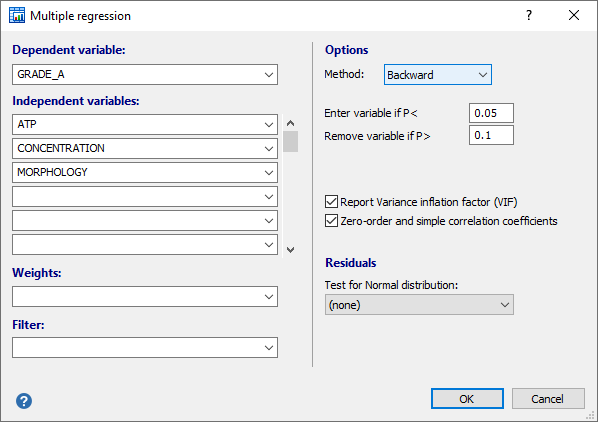 The variable whose values you want to predict.

Select at least one variable you expect to influence or predict the value of the dependent variable. Also called predictor variables or explanatory variables.

Optionally select a variable containing relative weights that should be given to each observation (for weighted multiple least-squares regression). Select the dummy variable "*** AutoWeight 1/SD^2 ***" for an automatic weighted regression procedure to correct for heteroscedasticity (Neter et al., 1996). This dummy variable appears as the first item in the drop-down list for Weights.

Optionally enter a data filter in order to include only a selected subgroup of cases in the analysis.

After clicking OK the following results are displayed in the results window: 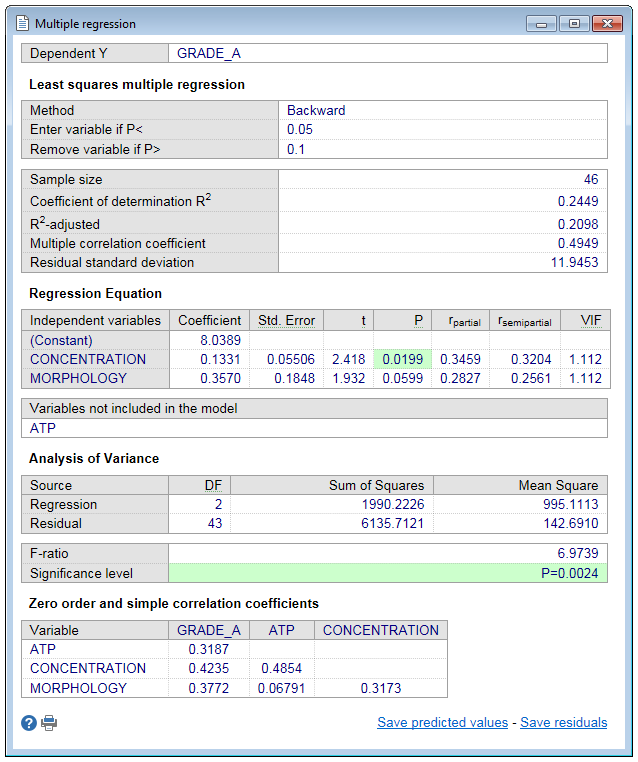 In the results window, the following statistics are displayed:

Coefficient of determination R2: this is the proportion of the variation in the dependent variable explained by the regression model, and is a measure of the goodness of fit of the model. It can range from 0 to 1, and is calculated as follows:

where Y are the observed values for the dependent variable,

Multiple correlation coefficient: this coefficient is a measure of how tightly the data points cluster around the regression plane, and is calculated by taking the square root of the coefficient of determination.

When discussing multiple regression analysis results, generally the coefficient of multiple determination is used rather than the multiple correlation coefficient.

Analysis of variance: the analysis of variance table divides the total variation in the dependent variable into two components, one which can be attributed to the regression model (labeled Regression) and one which cannot (labeled Residual). If the significance level for the F-test is small (less than 0.05), then the hypothesis that there is no (linear) relationship can be rejected, and the multiple correlation coefficient can be called statistically significant.

Multiple linear regression analysis assumes that the residuals (the differences between the observations and the estimated values) follow a Normal distribution. This assumption can be evaluated with a formal test, or by means of graphical methods.

If you want to repeat the Multiple regression procedure, possibly to add or remove variables in the model, then you only have to press function key F7. The dialog box will re-appear with the previous entries and selections (see Recall dialog).