A note on Passing-Bablok regression

Passing & Bablok (1983) have presented a statistical method for non-parametric regression analysis suitable for method comparison studies. The procedure is symmetrical and is robust in the presence of one or few outliers. But probably its main advantage is that is (or rather - seems to be) easy to interpret, which might explain its widespread use in method comparison studies.

In short, the Passing-Bablok procedure fits the parameters a and b of the linear equation y = a + b x using non-parametric methods. The coefficient b is calculated by taking the median of all slopes of the straight lines between any two points, excluding lines for which b = 0 or b = ∞. The parameter a is calculated by a = median { yi − b xi }. For both a and b the 95% confidence intervals (CI) are calculated. The Passing-Bablok procedure is valid only when a linear relationship exist between x and y, which can be assessed by a cusum test (Passing & Bablok ,1983).

The equation y = a + b x defines the regression line, but not all observations lie on that line. In fact, observations are not defined by the equation y = a + b x but rather by y = a + b x + e, with e (the residual) being the difference of the observed y value with the value predicted by the regression equation for the corresponding x value. Passing & Bablok (1983) suggest that residuals should be calculated as the orthogonal distance to the fitted line; this is merely a linear transformation of the residuals as defined above.

The residuals represent the remaining variation after correcting for systematic and proportional differences.

Since the procedure supposes a linear relationship the residuals should show a random pattern and should be close to a normal distribution. Therefore 95% of the residuals should lie in the interval ± 1.96 times the residual standard deviation. This interval then defines the random differences between the two laboratory methods.

With intercept close to 0 and slope close to 1, the residuals plot shows a remarkable correspondence with the bias plot (Bland & Altman 1986; Krouwer 2008) and its interpretation can be similar. 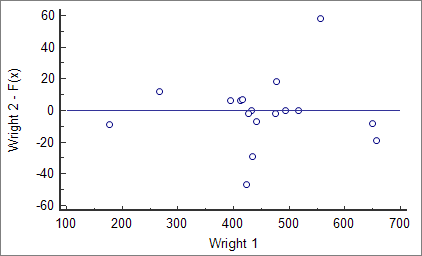 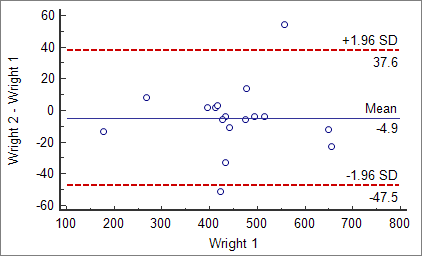 Bias plot with limits of agreement lines. Differences are plotted against method 1 for sake of comparison with the residuals plot above.

The bias plot shows the differences that can be expected between two methods, but what differences are acceptable?

Jensen & Kjelgaard-Hansen (2010) give two approaches to define acceptable differences between two methods. In the first approach the combined inherent imprecision of both methods is calculated (CV2method1 + CV2method2)1/2, or in case of duplicate measurements [(CV2method1 /2)+ (CV2method2)/2)]1/2. In the second approach acceptance limits are based on analytical quality specifications such as for example reported by the Clinical Laboratory Improvement Amendments (CLIA). A third approach might be to base acceptance limits on clinical requirements. If the observed random differences are too small to influence diagnosis and treatment, these differences may be acceptable and the two laboratory methods can be considered to be in agreement.

With regards to sample size, it is obvious that when sample size becomes smaller, the CIs become larger (wider) and the probability that 0 is in the CI of the intercept and 1 is in the CI of the slope increases (see also Mayer et al, 2016). The result is that method comparison studies based on small sample sizes are biased to the conclusion that the laboratory methods are in agreement. Sample sizes for Passing-Bablok regression should therefore not be small. Ludbrook (2010) cites a sample size of at least 50. More detailed estimates of suitable sample sizes are given by Passing & Bablok (1984).

We conclude that the statement of Passing & Bablok (1983) "If we accept both b=1 and a=0 we can infer y*=x* or, in other words, both methods are identical", is wrong and that the two laboratory methods are not in agreement when the confidence interval of the residuals is large.

We recommend that Passing-Bablok regression for method comparison studies should not be limited to estimation of intercept and slope with their 95% CI. With the intercept being a measure of systematic difference, the slope being a measure of proportional difference, the residuals represent random differences and should be included in the statistical analysis and in the method comparison report.